I figured the coach’s question was motivated by something I’d done wrong and not because he wanted to get to know me better. My failure to pick up the backside linebacker or something or another was the “story” he was wondering about so intensely.

I didn’t have a “story” to give him about my blocking assignment, but I did have a story within me, even at the tender age of 15. I was pretty sure he didn’t want to hear that story, so I kept my mouthpiece in place and remained quiet as he ranted about the virtues of moving my lazy backside more quickly and remembering my responsibilities on each and every play.

I never did learn the virtues of remembering my responsibilities on each and every play, so my football career came to a quiet end before the end of my sophomore season. My real story, however, continued on and has been unfolding ever since.

We all have a story that’s worth sharing, no matter what our inner critic says. I believe that if we took a little time to get to know each other—about where we’ve been, about the challenges and triumphs we’ve experienced—there’d be a lot more kindness and tolerance in the world.

If you knew the stresses and challenges that guy that just cut you off on the freeway has faced and is dealing with, you probably wouldn’t shoot unkind words or hand gestures in his direction. Just because he does something you think you would never do does not make him an “idiot” or “jerk.” He, too—like everyone else—has a worthwhile story to share. 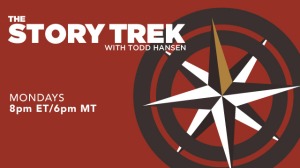 Boldly going where no one has gone before

BYUtv’s “The Story Trek” builds its foundation on the premise that everyone has a worthwhile story to share, and has been sharing those stories since 2011. Created and hosted by Todd Hansen, a former TV anchor and reporter for Fox’s Salt Lake City affiliate, “The Story Trek” is more real than any “reality” show on TV.

Hansen and his crew travel the country randomly choosing people and asking them to share their story. There are no auditions, no screening processes, or favoritism involved in this show. As long as someone who’s approached agrees to share his or her story on camera, it makes it into the show.

“The Story Trek” is in its eighth season, has won seven Emmy Awards, and is a staple on BYUtv, which is a service provided by Brigham Young University.

If you think BYUtv only airs religious programming because of its affiliation with BYU, think again. While there is mention of God and religion in “The Story Trek,” there is no religious agenda behind the show. More often than not, religion is not mentioned in the show.

What I enjoy most about “The Story Trek” is its ability to capture the essence and value of its subjects’ stories. Many times I’ve thought that, at first appearance, a subject’s story would not be very interesting, but, pushing beyond preconceived notions, it quickly became evident that I was wrong.

“The Story Trek” is worthwhile viewing for everyone, especially if you’re tired of the grind of mainstream network TV programming. The show stays true to BYUtv’s mission of inspiring its viewers “to see, do, and be the good in the world by providing uplifting content … and elevating ideals into action.”

Had Hansen been my high school football coach back in the day, I’m sure he would have wanted to hear my real story instead of yelling at me about a botched blocking assignment. Thanks, Coach Hansen!