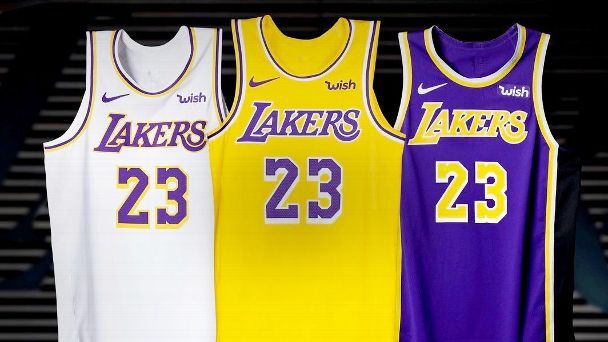 In case adding the best player on the planet wasn’t enough excitement for the team’s fan base, the Los Angeles Lakers unveiled a lineup of new uniforms for the 2018-19 season on Tuesday.

The new uniforms are modified versions of what the team wore during its Showtime era, minus (thankfully!) the short-shorts.

According to Paul Lukas, ESPN.com’s resident uniform expert, the best updates were made to the jersey collars and armholes, which more closely resemble what Magic Johnson and James Worthy wore back in the day.

Changes were also made to the number styles on the jerseys.

Perhaps the best modification was the removal of the side panel on the jersey from recent seasons.

In a puzzling move, the Lakers’ purple jersey now contains a black side panel. Black?

We interrupt this blog post for a breaking assessment.

The late great John Wooden once said, “Although there is no progress without change, not all change is progress.”

While the new uniforms made some improvements, adding a black side panel to the purple jersey is enough to put a damper on the entire project.

With LeBron James in the fold, though, it really doesn’t matter what the Lakers wear, as long as they get to wear it during the postseason, right Lakers Nation?

Compared to the Clippers’ 2015 uniform “upgrades,” the Lakers scored a slam dunk with today’s unveiling.